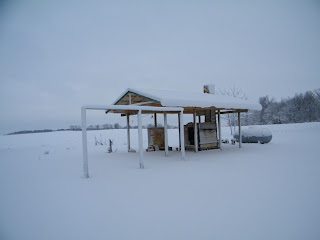 "Everybody talks about the weather, but nobody does anything about it." Was it Mark Twain who said that? Oh wait, I can do a google search and find out the truth!!

But, back to my musings. I just wanted to say that I'm a leeeetle bit tired of hearing complaints about the snow. THIS IS FEBRUARY. WE LIVE IN THE MID-WEST. It's supposed to be cold and snowy. (Regardless of what the climate change fear mongers would have us believe. But that's a different rant!)

I actually have enjoyed all the snow we've gotten this year. I think it's beautiful, and if the weather's going to be cold, I'd just as soon have snow around. I don't really mind shoveling it, or driving in it, or walking through it. And now that it's the middle of February, I'm pretty sure it won't be with us too much longer. And it really hasn't been with us that long. I might be more tired of it if it had been around since last Nov. or Dec. But it's only been a few weeks. I haven't had time to get tired of it yet. 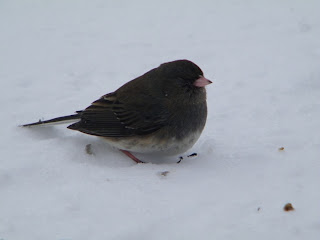 a few interesting bird experiences. I've been trying to keep the bird feeder full for the local birds. The other day, during the most recent snow fall, I was out taking some pictures and as I walked up the deck steps, I scared the birds away from the feeder. Except for one little junco. I decided to walk out and get a closer look. He didn't move at all. When we lived in Ohio, I had a similar experience with a mourning dove. It turned out the bird must've just died peacefully sitting in the snow. I decided to take some pictures of the junco since I could get so close to it.

After snapping a few, I noticed that it looked like it was breathing. Then it opened its eyes! I was discussing with Steve whether or not we should try to bring it in and warm it up...when I got up from my photo shoot position, it flew off! I'm hoping it was was just resting a little and got its second wind! 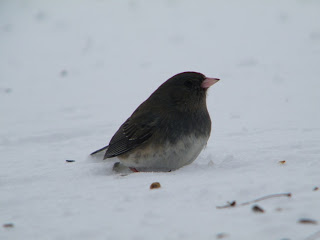 A few days later, I was unloading my groceries on a sunny, but cold day. I left the hatch back on the car up while I brought some of the groceries in and spent a few minutes in the house before going out to get the rest of the groceries. When I walked up to the car, I noticed about a dozen birds flew out from underneath the car. Apparently they were cozying up to the warmth of the engine. As I shut the hatch, I thought to myself, surely no birds would have flown into the car because of the warmth of the sun shining in the windows. Right as that thought crossed my mind I noticed 2 or 3 sparrows flittering around the front seat area. I opened the driver side door and they flew out. So far I haven't found any "presents" from them in my car!!

One thing I'm not looking forward to is when all this snow starts to melt! I do hate the thaw!! All that mud and muck. Yuck!! It was my least favorite time of year when we lived on the farm in W. Milton, and had horses, goats, etc. Too much mess!

The other thing I don't like is that I can't fire the salt kiln in this weather. But it's given me opportunity to get some things done around the house.

I am beginning to think about the garden. I saw seed packets on display at one of the local stores. I need to figure out a way to build a cold frame, so I can start some seeds. That would make it seem like spring's on the way. Altho, like I said, I'm not in that big of a hurry to let go of winter. February is a short month anyways. I have no idea why winter's not bothering me much this year, but I guess I'll just enjoy it!! 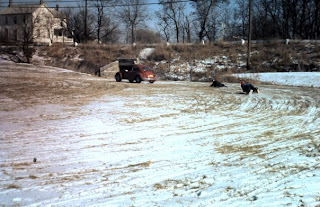 Here are a couple of pictures from when I was a kid. We'd go to my cousin's house and her dad loved to tie a sled (or several) behind his VW Beetle and tow us around behind it in the snow!! They also had an awesome sledding hill (as long as you were careful not to land in the creek at the bottom of it!!) Fun winter memories!! 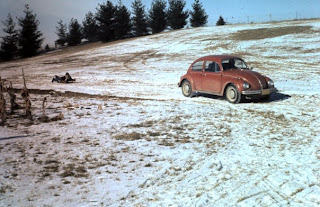 Posted by Hoosier Mama Now at 7:20 PM No comments: