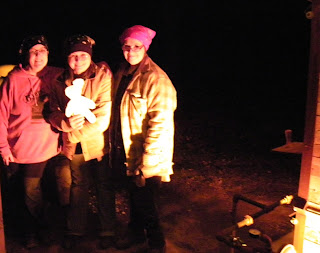 The title of this post has absolutely nothing to do with the contents. I just couldn't think of a catchy title and I'm watching Seinfeld re-runs. Maybe I should've called it Serenity Now........

Since my last post, I've fired my kiln twice and have garnered many, much informative information, yes I have.

As I mentioned before, I was hoping to find a firing method that would produce rich surfaces, with flashing and texture. I have 2 other potter friends who are interested in learning more about soda firing and were willing to help. (Julie and Rita.) That's us, pictured above, basking in the glow of my venturi burners. I'm holding a small, cardboard figure named "Flat Stanley" that arrived in the mail the day we fired. He was a kindergarten project for a friend's grand-daughter and was supposed to spend the day with me, so he "helped us" fire the kiln!

I'm going to share as much detail from our experience here as I can, because I was so thankful for the information we were able to gather on the internet and utilize in our firing! Even though experience is the best teacher, I hope this can at least give interested, inexperienced potters like myself a starting point. I had never ever fired a gas kiln before last fall!! So take my findings for what they're worth! (Liability disclaimer.)

We used a couple of books, Soda, Clay and Fire, by Gail Nichols and Soda Glazing by RuthAnne Tudball. We found our most helpful information on Emily Murphy's pottery blog. (Luckily we also love her work and the dynamite results she gets on her pottery!!) This particular page of her blog was chock full of information!

The first firing we mixed up a batch of Emily's soda mixture recipe and decided to introduce the whole batch. We weren't absolutely sure what size of a kiln this amount was intended for, probably larger than mine, but we thought it may also have been intended for a seasoned kiln. We decided to start with this amount and if the draw rings made it seem as if we didn't need to use it all, we could always stop. On the other hand, if it didn't seem like we were getting enough coverage we did have some extra dry ingredients mixed together, all we would need to do is add water.

For reference, my kiln is a sprung arch down draft with a hard-brick interior coated with ITC, soft brick exterior with ceramic fiber insulation on the roof. The interior dimensions are approx. a 36 inch cube, with a little extra at top for the arch. That's about 27 cubic feet of firing area. The stacking space is about 14 cubic feet. I have 2 burner ports in the back, one on each side, and a soda/salt port above each burner. I have 2 spies on each side near the top for cone viewing and draw rings, and a spy in the bottom front door. Before our first soda firing, I had done 2 salt firings in this kiln.

The soda mixture consisted of:
Mixed together with 1/4 of a 5 gallon bucket of wood chips. (I bought a huge bag of pine horse bedding from our local Tractor Supply store.) Mix together well, then add enough water (while mixing) to the consistency of oatmeal cookie dough. We formed it into "turd-like" logs and layered it in a bucket with newspaper. It hardened up quickly, and we crumbled the pieces and placed them on a piece of angle iron. We would introduce it through the back ports of the kiln when c. 9 was soft. We would fill the angle iron as full as we could and add the mixture to each side and wait approx 10 min. before repeating the process.

I didn't do a body reduction, I think the atmosphere of the kiln was pretty neutral until we added the soda. We did some things in the first firing that we decided were incorrect, so we didn't do them in the 2nd firing.

One of those things was placing small bowls of salt throughout the kiln. I had talked to a couple of potters who do this. One of them salt fires and the other soda fires. I gather that their reasoning is that there will be less chance of dry spots on pots if there some salt in there to provide additional "fumigating." (?) I made a huge mistake in doing this by putting the salt in raw clay. I'm sure that any experienced potter would know better than to do this. (as I know now!) I remember thinking in the back of my mind, "maybe we should use wadding." That would've been a good idea. I did dip the bottoms in kiln wash (as I do my cone packs) so they wouldn't stick to the shelves. Unfortunately, they reacted with the salt by melting into lava-like lumps that dripped through shelves onto various pots and had to be chiseled off my shelves after the firing!! Luckily, I only lost one piece due to my stupidity!!
We decided that besides causing a huge mess for us to clean up, introducing this extra salt was not giving us a true presentation of the soda vs.salt firing so we didn't do it in the second firing.

The results from our first firing were acceptable, but not what we had envisioned (even though we told ourselves we were trying not to have preconceived expectations......(yeah, right!) When we unloaded we tried to make note of how the flashing that did occur traveled, but we felt like the results were affected by the salt pots, so we weren't absolutely sure what to think! We got some flashing and orange peel, but not as much as we expected and somewhat localized to certain parts of the kiln.
We introduced the soda similarly to the way I had introduced salt in my other firings. I would turn the burners down or completely off, close the damper, add the salt and leave the burners on low and the damper closed for about 5 minutes while the salt fumes wafted throughout the kiln. Then we would open the damper and turn the burners up and fire in oxidation for about 10 minutes to clear the atmosphere. We would repeat the process about every 15 min. until the the draw rings showed significant coverage. Then we heated the kiln up til cone 10 was bending in the coolest area.

We read some interesting information in Gail Nichol's book about doing an hour or so worth of heat work after the last introduction of soda to enhance the results. She mentioned achieving different results depending on the kind of atmosphere the kiln was in during this time (oxidation vs. reduction) but we didn't quite understand her descriptions of exactly what kind of results each environment would produce. We decided to keep our first firing in a fairly oxidized state as a starting point. 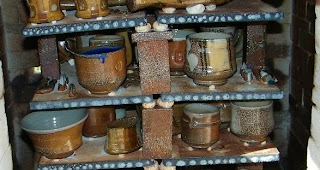 We were pleased with the results on the phoenix clay body and we liked the 50/50 slip (half epk/half ball clay) the best. The Helmar slip was pretty orange, as was Bauer. Also, we had some cone 10 B-mix in there, that came out mostly grayish white without much flashing except where it had been slipped. 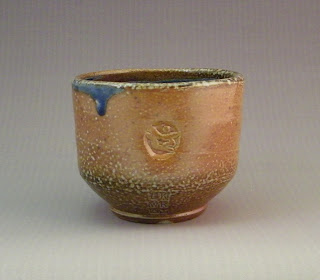 As far as glazes, we used some celadon liners developed by June Perry She recommended various colorants to try. They were very consistent, and we especially liked one that had cobalt as a colorant. It was a deep, rich blue that complimented the dark brown of the phoenix quite well. 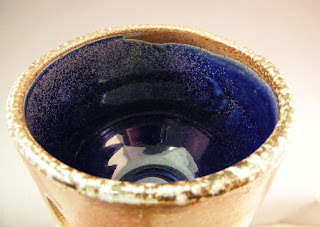 I had a turquoise oribe recipe I got out of John Britt's book. I had used it in my salt firings and wasn't pleased with the results, but thought my application might have been too thin. Tried it again, with a thicker application - - YUCK!! and DOUBLE YUCK!!! It came out a bright, gawdy, terrifying blue!! I am chucking that glaze and trying to find a new one. I want one with some iron and matte areas, that can blush red.

My Malcom's Shino worked well on cups and bowls, but on highly altered pieces that didn't have an exterior glaze, it seems to cause the pots to crack.

I had also mixed up a batch of Yellow Salt. I got the recipe when I was at the Odyssey Center in NC. It can come out nice when it gets hot enough, but it can also look dead. It's a yellow matte glaze that will get some speckling.

We also had a crackle shino, but it didn't seem to be thick enough. I also told Julie I thought she should apply it over a flashing slip to make it crackle more randomly.

After a couple of days spent cleaning shelves and chipping and grinding off the melted salt pots, we were ready to fire our second load. We mixed a few additional liner glazes. I had a recipe for The Glaze from Scott Shafer, and Julie found an Ash Celadon recipe in an article in Ceramics Monthly that was written by Tony Clennell.

We decided that we hadn't introduced enough soda in our first firing. We just didn't feel we were getting the juicy results we longed for and came to the conclusion that if a little is good, more must be better!!! We decided to introduce 1.5 times the amount we had used the first time. We also decided that we would put the kiln into a bit of reduction when we did the last hour of heat work.

Things were going relatively smoothly and we had added about 2 rounds of the soda mixture when Julie had a major epiphany. She asked me why we were turning the burners down and closing the damper when adding the mixture. I didn't have a good answer for that one. I thought that I had read it somewhere or heard a potter saying that was how they did it, but the more I thought about it, the more it seemed like that method was better suited for a salt-firing atmosphere. Since the soda mixture was heavier, and tended to drop down into the firebox, Julie's idea about keeping the burners on full blast and the damper opened seemed like it might give us better results. We searched both books and even got online to try to find specific information on this, but couldn't find anything! So, we decided to give it a try with the remainder of our soda introduction.

I think it made a huge and wonderful difference!! We achieved the results we were looking for! We got some beautiful directional flashing, and some dark, pebbly orange peel surfaces. The ash celadon glaze seems to have some promise as a liner also. 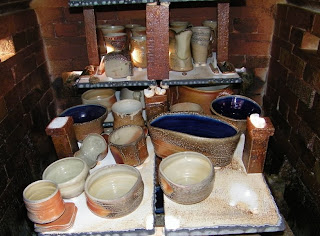 Tomorrow we're going to try to take some really nice photographs of the best pieces! I think Julie and Rita were pleased with the results. I know I was, I just need to make some bigger, more substantial pieces now, with shapes that will be enhanced by the soda. I'm looking forward to getting back in the studio!! I'm beginning to feel like I've figured out some things about my kiln and this method of firing and I'm hopeful that I'll be able to repeat some of the successes we had (and avoid repeating some of the mistakes we made!!)