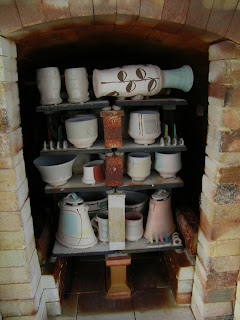 Spring has sprung on the Indiana tundra!! Up at 4:30 this morning to fire the kiln. We loaded it yesterday and pre-heated it last night. It's cooking along right now. I tell myself I can go back to bed once I get the burners started up again, but I never do. It's peaceful this early, especially on a Sunday. Heard a few coyotes yipping in the distance.

Julie is firing with me this time and has some pots in the kiln. We are going to attempt a soda firing, instead of salt this time. While I'm pleased with the results from salt-firing, it's not quite exactly what I'm craving. It's sorta like when you want an Esther Price dark chocolate, bourbon cherry, but you're eating a hershey bar with almonds. It's good, but you know you can do better.

I want a surface with more flashing and variation. Something that doesn't require so much decoration and brushwork. I am enjoying the brushwork, but I think I'm doing too much of it and it's detracting from the beauty of the clay itself. I suppose it's a common problem to be worked through. I'm hoping to apply more subtle brushwork and get more surface variation from the soda. I think I want something in between Emily Murphy and Linda McFarling. (To anyone reading this who is not a "pot-aholic" I will try to find photos of the work to which I refer! 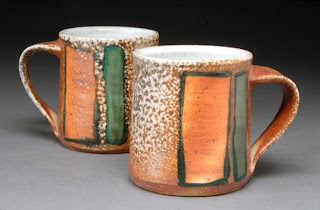 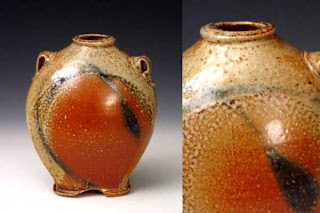 So, we shall see if we can figure out the nuances of the soda vs. the salt. I won't go into the boring details, we'll just wait and see what the work comes out like.

In other news, I attended a workshop a couple of weeks ago in Louisville that was about art as a business. They talked about formulating a business plan, and a lot about marketing, especially online. One of the speakers claimed that in this day and age, the need for a business to have a website could be likened to the need for a telephone twenty years ago! Probably true.

They provided many online resources with templates for business plans. So I made an attempt to at least begin formulating a plan of action. It was actually helpful because it felt like it gave me some focus and direction. I also built myself a website. The cost of having one really isn't that expensive from a marketing standpoint. The hardest part was trying to decide which host to use. There are a TON of them out there and I'm not sure I picked the best, but when you're talking under $10/month, it feels like you can't complain much.

One thing that was brought up at the workshop is that a lot of artists don't figure the time they spend marketing into the prices they charge for their work. That's probably very true. I don't know if anyone could afford my work if I started figuring all that into it!!! It amazes me how much time it takes to set up a website or design a brochure. Something I think should take an hour or 2 ends up taking 6-8 hours!!

Of course it doesn't matter what you charge, if you're work's not selling you're not even breaking even, let alone making a profit. I don't have a lot of work out there right now, just some pieces at Bear's Mill. But they're definitely not selling so I guess I need to figure out why.

Well, it's almost 8:00 and this chick is ready for a nap!! Not used to getting up this early, may have to brew a second pot of coffee. And need to go check the kiln again.

Hopefully some pictures of juicey pots will be posted in a couple of days!!
Posted by Hoosier Mama Now at 3:04 AM No comments: