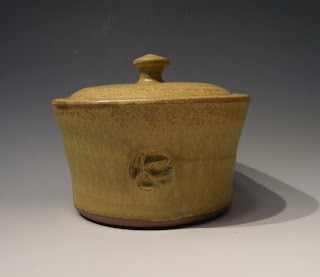 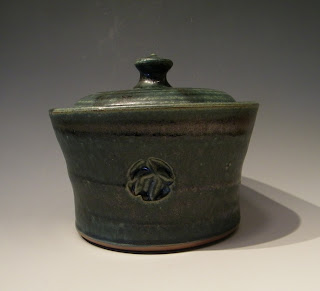 Well, the big "holiday rush" is over (and wasn't much of a rush at all!!) Instead of having a "Winter Open Studio" I decided to have the studio open the week before Christmas.....Mon - Thurs. 11-7.
Our daughter's second child was due Dec. 4 and we were on "stand-by" to baby-sit the older son in case she had to go to the hospital (she was attempting a home birth.) She did end up in the hospital, so we got to stay with Jaedon for a few days! It was great fun and put a little monkey wrench in my firing schedule, but didn't really cause any problems in the long run.

'Cause I didn't have much business!!!

It does seem like though, that every time I start to feel really discouraged, something happens to bolster my spirits (and get my hopes up again.) I'm not sure if that's good or bad. Sometimes, you should just let a whupped horse die (is that the proper terminology?)

I've talked it over with Steve and we think I can keep plugging away at this for another year and see if I can drum up a little more business.

I haven't fired the soda kiln since early summer. I still have tons of salt and soda pots that haven't sold. I finally put them on "Super Clearance." $5/apiece no matter what the size or original price. Some of 'em were probably only worth that from the start.

Figuring out a price point has been extremely difficult. The prices I charge for work at Bear's Mill have always felt too high to me. Of course I am paying a consignment fee and have to figure that into it and I don't want to under price 'cos it offends the other potters and cheapens their work. By the same token I don't feel like I'm at the same level as some of the other potters so I feel like my prices are set at more than the work is worth!

Then, pricing things here in New Castle has been even harder. I've had the prices too high (comparing them to what they sell for at Bear's Mill.) There are only a few other potters in the area and their skill levels run the gamut. The one thing they all have in common is dirt cheap prices. It amazes me that really talented potters have their work priced so low, but I guess they can crank them out. I understand why some of the less experienced potters charge the prices they do. But most of them aren't doing it full-time as a business, so they don't really care if they make money at it. 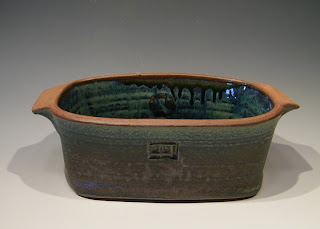 So that means I need to get efficient enough that I can crank out enough pots to make it worth my while. Like I keep saying, I'm just lucky that I have no education or job skills that would pay much more than min. wage 'cos that's about what I think I'm going to make in this business!! Actually, even that goal might be unattainable!!!

The general public probably can't even tell the difference between the work of the various potters. They just look for cheap prices and "purty" colors!!

Of course I'm not referring to ALL the local pottery collectors. I have managed to attract a few regular buyers and they're wonderful people who are willing to spend their hard-earned money buying my pottery. Most of them have become friends and I truly appreciate their support! 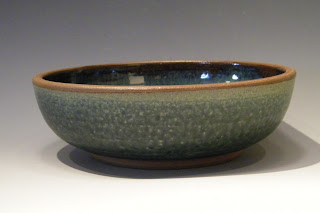 I'm just trying to come up with a line of work that appeals to a wider variety of local shoppers. Since it seemed like the salt and soda work wasn't really selling, I decided to focus on firing in the electric kiln for awhile. As I mentioned in an earlier post, I was working with some potter friends at Bear's Mill on developing a line of functional, reproducible bake ware to sell. In addition, we needed to come up with a new, glossy green/blue liner glaze to complement the green ash glaze that Julie and Rita developed.

I thought when I decided to focus on the electric kiln that it would be smooth sailing. HAH!!! IT has definitely presented its own challenges and frustrations! I've experienced over-firing, bloated clay, pinholes, glaze dripping on my kiln shelves, glazes applied too thickly, too thin of glaze applications, cracked bottoms, etc. etc. etc.

And yet, I'm lovin' it!!! I know I sound like I'm bitching, but I'm really not. Well, not about the process, which can be fairly labor intensive. No, that I love!! I just wish I could figure out a way to sell enough to justify it as my "career." At least I can continue to blame the economy thanks to all the shenanigans the current administration is pulling. Even with the latest election, I don't see things changing much the next few years. But that's a WHOLE 'nother blog post!!!

Anyways, I feel like my forms are becoming more consistent and I've even managed to develop a new glaze that I'm going to use as a liner. Pulling that test piece out of the kiln was a very exciting and rewarding moment!!! Julie had suggested I try adding the same colorants to our glossy, clear base liner that we're using in the ash glaze for the outside of pieces. She said it seemed to need an opacifier and suggested I try zircopax. I did a little reading up in one of my firing books and it was suggested that rutile was a good opacifier and actually made glazes more stable than zircopax. Decided to try it and was quite pleased with the results!! This is the liner glaze with rutile on the salad bowl........
Salad Bowl with Rutile Blue/Green Glaze 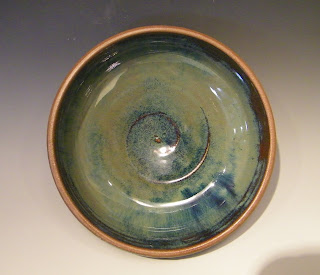 So, now I think I've done quite enough blogging for one sitting so I will close this session and try to improve my blogging frequency. Not that it really matters to anyone, but it does seem to help me stay focused. 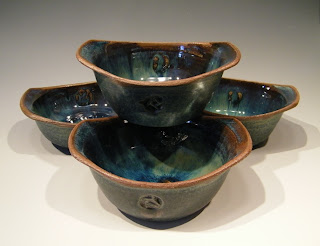 Email ThisBlogThis!Share to TwitterShare to FacebookShare to Pinterest
Labels: Pottery

Good to see you posting again.

Thanks Dennis. Seems like lately all I've been doing on the computer is working on various marketing ideas and boppin' around on facebook!